Your child "model scam" was recently brought to our attention

Kids.com: "Your child was recently brought to our attention."
Mrs. Olesen: "I thought somebody saw our child and they were interested in him."
ABC News Chicago: "The family's name was merely obtained from a mailing list purchased by the company." 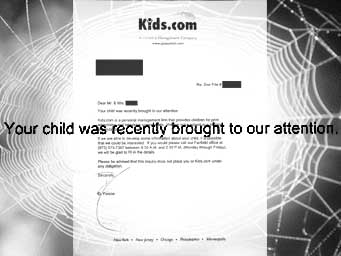 Any day now, complaints against Kids.com advertising will be added to the
Easy Background Check website. You are now given an opportunity to respond
with a written statement.

As you must know, Kids.com advertising, by way of your infamous introduction
letter, which includes the statement, "Your child was recently brought to
our attention," is very controversial.

1. CBS affiliate WCCO exposed your advertising, showing the letter on their
broadcast.

2. The FTC said they want to see your advertising letter.

3. Parents complained to WCCO about your advertising, saying it was a
misleading letter.

4. The class action lawsuit against Kids.com in MN had a complaint about
your advertising: "Upon information and belief, Defendant obtained vital
statistics from Hennepin County and surrounding counties regarding the
families they sought to solicit. Defendant would send letters to such
families indicating that "Your child was recently brought to our attention"
and invited those families to contact Defendant's offices to obtain further
information. Such solicitation misrepresented, mislead or otherwise caused
confusion and/or misunderstanding with Plaintiffs and other class members
about how their children were selected for contact" (Radke, Kleinschmidt and
Colston vs. Kids.com, LLC, d/b/a Kids.com, ¶10).

5. The BBB in NY has received complaints about your advertising
(http://www.bbbnewyork.org/businessreports/Default.aspx?id=55233)

6. The BBB in IL received a complaint about your advertising
(http://www.chicago.bbb.org/common.html?location=/home/common/www/mis67/report.p
hp&bureau=chic&compid=25000643)

7. Another parent complained about your advertising: "I also was taken in by
the fact that the letter stated that my daughter was 'brought to their
attention.' I assumed that my inlaws or my parents had submitted a picture
of their beautiful granddaughter to some contest, and that 'Kids.com' was a
modeling agency that took note of her."

Reasonable people believe the Kids.com statement, "Your child was
recently brought to our attention," is at best misleading or at worst false,
because the fact is nobody brought the child to your attention; instead you
bought the name from a baby registry.

Who at Kids.com wrote the introduction letter? Who at Kids.com approved
it? Who is responsible for the Kids.com advertising? Who wrote the
statement, "Your child was recently brought to our attention"?

Mr. Bagwell, amid the mounting public criticism against, and secret
federal investigation of, Kids.com, how do you respond to the consumer
complaints Kids.com engages in false and misleading advertising?

Your advertising, consumers have said, misled them, and it is obvious it
has the capacity to mislead so many consumers, all 16,000 of your clients,
because the situation for each consumer is the same; they are a class of
similarly affected individuals: they were all mailed the same letter and
their names all came from a baby registry you bought and turned into a
mailing list.

How do you answer the charge of false advertising?

[No response has been received from Bagwell to this letter, posted here Sept. 27, but he still has the opportunity to write.]

They sent us a "came to our interest letter" AFTER we signed up!

In Fall of 2002, I spole [sic] to a local talent agent who assured me that the way Kids.com works is NOT the way . . . regular agents operate. Then, last winter, I received a letter from Kids.com saying, "Your child has come to our attention, etc." I was curious as to how he was brought to their attention--and even more curious about the fact that they didn't even check to see if we were already a client before they sent us that introductory letter. So I called and a rather rude man answered. I asked him how my son had "come to his attention" and he didn't answer me. He said they were really busy and someone would call me back. No one ever called back. I felt very put off by this brief and gruff conversation. I didn't even get to the part that my son was already "a client." [Full story]

Update: Larry Bagwell Mail Fraud Exposed (ABC News Chicago): "The Olesen family's relationship with kids.com began with a form letter they received at their home south of Joliet, stating "your child was recently brought to our attention." "I was very excited because I thought somebody saw our child and they were interested in him," said Tammy Olesen. But as with every family they send letters to, nobody from kids.com had actually seen their child. The family's name was merely obtained from a mailing list purchased by the company." [cont...]

["Postal Inspectors investigate any crime in which the U.S. Mail is used to further a scheme, whether it originated in the mail, by telephone or on the Internet. The use of the U.S. Mail is what makes it a mail fraud issue."]